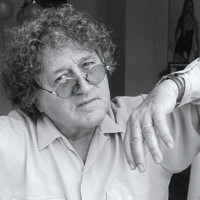 As a painter, printmaker and sculptor Bruno Bruni is one of the most popular contemporary artists. After visiting the "Istituto d'Arte" in Pesaro (Italy) and studying at the "State Academy of Fine Arts" (Staatlichen Hochschule für bildende Künste) at George Gresko, Paul Wunderlich led him in the technique of polychrome beam lithography, a technique that has fascinated him from then until the present day.

Since 1960 Bruni has lived and worked in Hamburg, since 1965 he as been working as a freelance artist. Having lived in Germany for more than 50 years, his work still reflects his Italian roots and his admiration for the Italian art and masters of the Renaissance. The "beauty", has its place in his work. During a Bruni-exhibition he commented that he would allow "the viewer the right to unobstructed aesthetic pleasure". This insistence and his far-reaching ignoring of the "-isms" and art trends of the last century, have made sure that Bruni can look back on an extensive and aesthetically consistent collection of art. These collections of art have left traces of surrealism and abstract expressionism.

Bruno Bruni has had numerous solo exhibitions, including in London, Berlin, Munich, Milan, Brussels, Amsterdam, Tokyo, New York, Melbourne, St. Petersburg, Hamburg, Madrid, Rome, Valencia and Zurich. In the Hannover Gallery he has a permanent exhibition of his works since 2003.