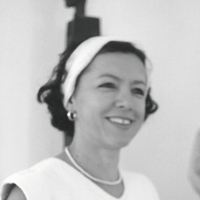 Christiane Raschke completed a "ceramic apprenticeship" (Kermamiklehre) (which she finished first nationwide) at the Free Art School (Freien Kunstschule) in Nürtingen. She then spent another two years working there with ceramic. After that she was a guest student at the Academy of Applied Arts (Hochschule für angewandte Kunst) in Vienna, where she learned from Prof. Bilger.

Since 1982, she has made an appearance with performances, installations and exhibitions; in the following year she began a study of the free ceramics and sculpture at the Art Academy in Stuttgart with professors Seemann, Günther and Spagnulo, which she completed in 1988.

Since 1986, she is also teaching. This lead to her working as a guest lecturer at the advanced technical college of design (FH für Gestaltung) in Schwäbisch Gmünd from 1986-1987. In 1988, she became head of the ceramics workshop in the "Workshop House", a workshop and a venue for courses and workshops in Stuttgart. Here, courses in ceramics, drawing and sculpture, film and textile design are offered. Since 1997, she has her own "Bergstatt" in Stuttgart, which she uses as a studio and venue for art events of all kinds.

After more than 35 years, Christine Raschke is still fascinated by clay, its endless possibilities and the expressive power give her ceramic work something magical. Her theme is humanity, paying particular attention to inter-personal relationships, which she is able to convert into art through interrelated groups of sculptures.