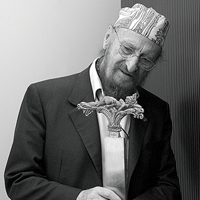 1957 Traveled to Israel, icon painting; His goal is to promote understanding between Jews and Christians

1963 Returned to Vienna; Ernst Fuchs opened a gallery which became a center for the devotees of fantastic realism

1970 Begun making sculptures made out of bronze, silver, granite and artificial resin

1973 Acquired the Otto-Wagner-Villa in Hütteldorf near Vienna

1988 Retrospective in Venice; Opening of the Ernst Fuchs private museum in the Otto-Wagner-Villa

1993 Overall artistic direction of work on the Church of St. James in Thal (near Graz)

1994 Sanctification of the Church of St. James (near Graz)