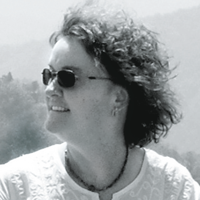 Fidelma Massey studied at School of Art, Dun Laoghaire majoring in Fine Art / Sculpture (Stonecarving, Claymodelling, Drawing and Ceramics). She engaged in commercial ceramics until 1986; after which time she returned to her original interest in pure sculpture, working in bronze, stone and ceramics. She also makes drawings and stained glass.

She has shown work in many group exhibitions during that time: Royal Hibernian Academy, Sculpture in Context, Iontas, L'Ecole des Beaux Arts, Paris. Shows work regularly in a number of galleries including the Solomon, Origin, Oisin, Bridge and Whichcraft Galleries in Dublin; the Greenlane Gallery, Dingle and the Kilrealig Gallery, Ballinsceligs, both in Co. Kerry.

Fidelma Massey's work invites the viewer to enter a world of alchemical transformation. The work is personal in the sense of being very much the product of an individual vision, but universal in the sense that it explores mythical themes and draws images from deep in the unconscious. In this world of blue moons and green men we find creatures which are both strange and familiar; the mother goddess seated in a cosmos of floating stars, the horned guardian of medieval legend and the unblushing sheila-na-gigs of the Celtic past. The images are very far from feyness or sentimentality however; they are earthy and grounded and often humourous.

They are creations of an eye which sees the world as a place where nature and growth are in themselves sacred. For her sources she draws not only on Western sculpture but on Eastern and Classical mythology, and through the fusion of these she leads her viewer to a world beyond the confines of any single tradition.
"All through the ages art has expressed the sacred. The oldest sculpture we know represents the goddess, the immanence of the divine on the material world. There is a long, unbroken tradition of making new forms and faces which express the laws of nature which make ourselves and our world. Life springs from eternal unchanging unity and diversifies into the various and changing forms of the phenomenal world. In the same way that light is always white but can be separated into the spectrum colours, so the gods manifest from the unchanging absolute: and so men and women have given them faces and forms appropriate to their own time. This is the tradition in which I work." (Fidelma Massey)