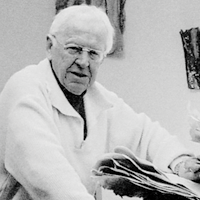 Even at an older age Franklin Pühn is still enormously creative. As a young man he completed an apprenticeship as a wood sculptor (Ausbildung als Holzbildhauer) in Erfurt, before he began studying sculpture at the Academy in Stuttgart under the tutelage of Professors Karl Hils and Otto Braun in 1948. Immediately after completion of this in 1953, he dared to step into the freelance sculpting world. Over the next six decades, he created a work that through participation in numerous exhibitions (Artist Association of Baden-Württemberg, Stuttgart Artists Association, Art Exhibition Munich and many others) and other solo exhibitions was greatly appreciated.

Pühn worked as a graphic designer as well as sculptor. His work covers a wide range of free-standing sculptures, monuments, small sculptures, reliefs and fountains for public spaces. In his sculptural work, he doesn't just use bronze and iron, but two decades ago he discovered paper as a material, which he used to form into intricate three-dimensional structures. During his long artistic life, Pühn has also worked as a teacher, which he still does with pleasure until this day. The filmmaker John M. Hartmnann accompanied Pühn on his creation process of his sculpture "Leda and the Swan". This documentary shows the creative process of the master from Heidenheim.

2005 Overall viewing of the art museum in Heidenheim, which marked the 80th brithday of the artist

1973 Fountain in front of the hospital in Heidenheim