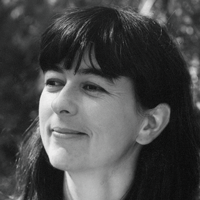 Born December 9, 1958 in Wangen in the Allgaeu region of Germany.

She grew up on her parents' farm on Lake Constance. She began painting all kinds of animals on stall walls and in her school note-books when she was still a small girl.

Her early attempts at nature studies later matured into a great exactness of representation which marks her pictures in crayon and oil as well as her bronze sculptures.

She finished school and then trained in agriculture (she was supposed to take over her parents' farm). She married an avid hunter and fisherman when she was 23 years old. From that point onward she devoted herself to painting. She then displaid her work in more and more exhibitions in the area of horses and hunting.

The high point came in 1995 when Gabriele Haslinger was invited by farm manager and art aficionado Dr. Wolfgang Cranz to exhibit her works in the museum of the State Stud Farm in Marbach, which was a great success. This was her breakthrough.

After that exhibitions such as: Euro Cheval Offenburg, German Masters Stuttgart, Hunting and Fishing in Munich, Horse and Hunt in Friedrichshafen, Horse and Dog in Dortmund, IWA, Casteller Landhaustage in the Royal Castle Gardens in Castell and International Wildlife Art Exhibition Wild in Nature in Enschede followed.

In 1995, the artist fulfilled a wish she had long nurtured by making her first bronze sculpture, which was an immediate success. From then on, she did horses and wild animals in bronze and made a name for herself as a sculptor. It is quite justified to say that she is one of the greatest in this field. Her sculptures are unique in their expression and dynamic motion. Art connoisseurs say that her works are similar to those of Jules Méne, as well as the great French sculptor Isidore Jules Bonheur.

She now lives on her parents' farm with her family and a large range of animals.