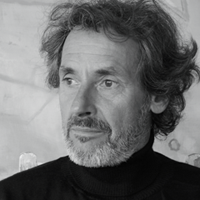 Günther Stimpfl studied sculpture at the Academy of Fine Arts (Akademie der bildenden Künste) in Vienna. Since 1975 - after working as a restorer and free-standing sculptor of the Viennese palaces of Belvedere and Schoenbrunn - he has created an extensive range of sculptural works. At the same time, he drew attention to himself with etchings, pastels and drawings.

Stimpfl's sculptures are enormous, they stand with a forceful presence which is enforced by their archaic-look. They seem to show a connection between the modern arts of our time and the design ideas from cultures of old. As a human-like figure they are only recognizable through minimal details such as the hint of a mouth. The almost architectural rigor can be lost in the act, which gives the figures an impressive grandeur.

His work sometimes has a more figurative, even realistic touch.