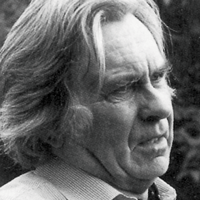 Gustav Nonnenmacher has lived and worked in Worms since 1951. He is not associated with any school but has lived as an independent freelance sculptor. He finished his "sculptor apprenticeship" (Bildhauerlehre) as a young man, but he only had the chance to work as a freelance sculptor years later, cause of this was the Second World War. Nonnenmacher survived the war as a pilot, the terror and catstrophe which surrounded him during this time has greatly influenced his work.

One of the first major works which attracted attention to Nonnenmacher, was a memorial to the victims of the World Wars. It shows, grouped around a large cross with the inscription "Be at peace. In memory of all who went out and did not return" (Haltet Frieden. Zum Gedenken aller, die auszogen und nicht wiederkehrten). This relief depicts the horsemen of the apocalypse, war, famine, pestilence and death. It was set up rather quickly in 1960 in the cemetery of Worms-Pfeddersheim. Nonnenmacher has created two more works of art that have become icons in the city of Worms. One of them is the Winery Fountain (1982) in the pedestrian zone of the city, the other is the Wheel of Fortune in the Upper Market (1986), both art works have become milestones in the heart of the city and the hearts of its citizens.

Nonnenmacher's work collection has been repeatedly shown in individual and total exhibitions since 1974. To this day, when the work of this famous sculptor is viewed, no matter in what material, they project the historical development of his nearly century-old resume. Gustav Nonnenmacher passed away on November 11, 2012.

1986 Design of the presbytery with the tabernacle and altar, Martinskirche Worms