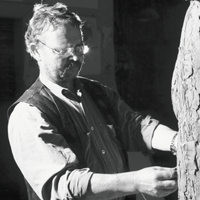 Taxidermist, restorer and eventually sculptor of rank - the artistic resume of Hans Nübolds looks remarkably consistent in retrospect, because for one, he is considered as a artisanal perfectionist and for the second, he has just as often excelled as a sculptor of animals, especially his reprensentation of horses are widely known. Nübold studied from 1960 to 1964 at the "state high school of applied arts" (Staatlichen Höheren Werkkunstschule) in Schwäbisch Gmünd under the tutelage of Fritz Nuss, subsequently from 1964 to 1966 he studied at the academy of art under Marino Marini - who at the time was committed to the creation of horse themed art.

Nübolds work is comprehensive and impressively diverse, evidence of this was at the millennium in Kirchheim / Teck, a first work exhibition with many of his drawings, reliefs, medals and sculptures that were curated. A second followed in 2009 in Bad Boll, this documented 45 years of artistic creation.

"Tradition does not bind - it sets you free!" (Tradition bindet nicht - sie macht frei!) was the title of the catalogue for his first exhibition. It provides a secure base which the artist can achieve, but equally well can exceed. Nübold's depiction of animals have realistic characteristics which are strategically placed in public areas where the large sculptures and their surroundings create a harmonious feel for the viewer (such as a flute-playing "Gänseliesel" including a flock of geese in Sontheim or a group of cheerful stilt running children outside the gate of Helfenstein Clinic in Geislingen). At the same time, there are sculptures such as his bronze variation of the Bremen Town Musicians, the rooster, monkey and goat known as the "Tower of vice" which symbolise "lust, vanity and betrayal". There are also highly abstract works such as the Möbius strip.