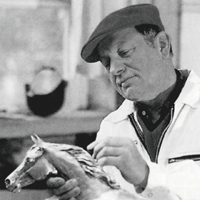 1935 Grew up in Iglau, Bohemia-Moravia. Began horse painting and drawing at the age of four

1954–1956 Then went to Konstanz, where he earned money for his studies by painting and making music

1988 "The Market Women of Schifferstadt" statue in bronze

1996 "King of Spades", large sculpture, winner of German Derby in 1992. Unveiled by the First Mayor of the Free Hanseatic City of Hamburg, Dr. H. Voscherau

The sculptor and painter lives and works in Friedrichshafen.