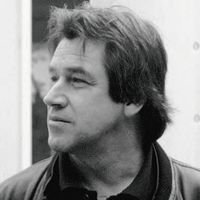 Just like his father and grandfather, Jörg Bollin grew up with the tools and materials to become a stone sculptor. He finished his "traineeship" (Lehre) in 1963 at the Freiburger Münster, the year after he was crowned national champion in the youth sculptor's competition. In 1969, he got his masters of crafts. Then in 1974, he took over the masonry and sculpture workshop of his father.

Since then, he has devoted his time to stonework, producing tombs and monuments in his workshop. He also trained several generations of young stonemasons and taught at the college for stone formation in Freiburg. He also spend many years dedicated to the interests of his craft (such as being Chairman of the working group for cemetery and Memorials).

In all his years, the free sculptural work took up a large amount of his time. In 1969, he had his first exhibition, which was followed by countless others. His work is characterized by unusual combinations of materials, the artist often combines his stone base materials with metal and glass, and even with technical equipment such as fluorescent tubes. Every artistic act, according to Bollin, repeats the creation of nature in miniature form, and so there is no categorical difference for him between "grown" granite and "artificiality". Primordial matter and "sculptures" go as artistic machined a symbiosis to form something new, which necessarily includes the previous one.

However, Bollin also manufactures classical sculptures in marble. For his sculpture "Neuen Menschen" he received the prize "Stein innovativ" in 2002.