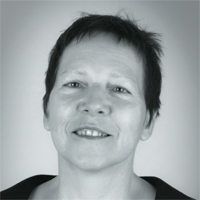 The Swiss Josette Taramarcaz is a graduate of the "Haute Ecole d’Arts Appliqués de Vevey" and since 1991, has presented numerous works in solo and group exhibitions at home and abroad. Toady, works from her studio can be found in many private and public collections.

For many years she has been dedicated to the exploration of ways to represent the human body, and has been searching for ways to combine the opposites of strength and vulnerability, action and contemplation. Characterized for her with "Case" titled works, is the integration of abstracted human forms in a strong, almost massive frame. Again, the appeal lies in the artful placement of opposites: Taramarcaz filigree figures, clearly inspired in their elaboration of archaic idols, they assert their superiority in their restrictive, so constricting environment.

Josette Taramarcaz works in Fully, this is in Kanton Wallis. And beside her artistic work she is the Vice President of Visarte Valais, the professional association of visually creative artists in Wallis.