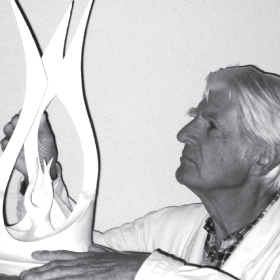 since 2002 making wood and bronze sculptures, started in 1997

My way of sculpture:

Weaving thoughts around a theme leads to definite forms. The goal is an idiom whose forms and designs are determined as little as possible from the outside – the reflection of my personality. The technical and musical background shimmer through in the internal logic of the way the lines and surfaces are arranged, and in coming as close to perfection as possible in the workmanship of the art objects.