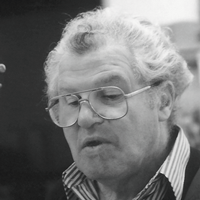 Kurt Grabert's artistic training began at a very young age (he attended the technical college of graphics), but war and captivity interrupted his professional career for more than six years. Then after the war, he was able to resume his studies in sculpture at the academy in Stuttgart.

The artist has used his double talent as a graphic artist and sculptor for the majority of his life. He worked as a graphic designer for many years, working for industrial companies and for newspapers. At the same time, he also created sculptural works in his studio in Hördingen near Überlingen. Then in 1975 his studio moved to Göppingen.

In the two decades before his death, Grabert still created significant graphic works (such as an over the years ever-growing graphic cycle about Georg Elser and his assassination attempt on Hitler). But he focused mainly on sculptures, with bronze being the material of choice for him. Numerous of his works decorate public spaces. Grabert's sculptures can be found in Urach, Metzingen, Zweibrücken, Großgerau and can be seen in the City Church of Göppingen. Grabert, who was regarded by his friends as a very sensitive, life-affirming and humorous person, shows these character traits in his sculpture for the square in front of the city hall in Ehingen. The statue shows a fool with a fool's cap and is entitled "Der Narr schaut in die Zukunft“ (The fool looks to the future), mocking all local government planning violence.