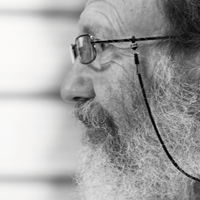 Michel Favre was born in 1947 in Lausanne (Switzerland). He spent his childhood and youth in Martigny, where he also served an apprenticeship as a stonemason.

He continued his training by working from 1967 to 1971 in various sculptors' studios in German-speaking Switzerland and attended courses at the Arts and Crafts Colleges in Bern and St. Gallen. From 1972 onwards he earned his living as a freelance sculptor in Martigny. In the following years he undertook a number of journeys abroad.

He is a member of the GSMBA, the Society of Swiss Painters, Sculptors and Architects. In 1988 he was awarded the art prize of the Henri & Marcelle Gaspoz Foundation and also in 1998 the MAC 2000 Prize in Paris. Since 1975 Michel Favre has regularly taken part in individual and group exhibitions at home and abroad.
His work is represented in a variety of public and private collections, especially in Switzerland, Germany, France, Belgium, Holland, England, Italy, Greece, Spain, Sweden, South Korea, Canada and the USA.

Besides his central theme of "Man", Michel Favre is currently concerned with the subject of tubes, spheres, pyramids etc in his formal language. Sometimes oversized versions of every day objects such as magnets, traps, soaps, packaging material or the remains of plants are employed in his work groups. The artist incorporates other materials into his bronze sculptures, for example, glass, stone, electronic components . . .

The major elements in his sculptures are, symbolically speaking, human beings in confrontation with their environment and the stupendous pace of technological change. In his three-dimensional portrayals the human beings are mostly tiny and ant-like, as if the artist had observed them from a distance. As intended, tensions, conflicts and marginal positions can be detected in his works.

In his role of unveiler Michel Favre brings hidden things to light. But he does not judge; he does not provide the observer with any key, or with any definitive interpretation.