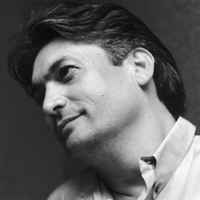 Miguel Sanoja comes from Venezuela, where he learnd at the School of Fine Arts, Cristobal Rojas' and, moreover, in 1978 completed a state exam as an art teacher at the college of education (Pädagogischen Hochschule) of Caracas. Here he worked as a art history teacher for many years.

Sanoja has been an active sculptor since the early seventies. Since 1971, his bronze sculptures have been shown in over 20 solo exhibitions. Very early in Sanoja's career, he was perceived internationally; exhibitions in his home country and in the United States were soon followed by presentations in Germany, Belgium and Holland. Today Sanojas works are in numerous collections in Germany, Argentina, Australia, Colombia, Spain, France, England, Italy, Norway, Portugal, Puerto Rico, Sweden, Switzerland and Venezuela.

Sanoja's work is partly shaped by his intense engagement with the art history of Central America. He is, however, intensely influenced by the works of western Europe. Beyond these criteria, he finds his subject especially in a - universal - imagery that strives again and again, to capture the topics of nature and, above all, work on the human shape in ever new variations.