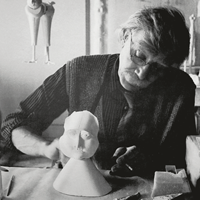 Paul Wunderlich began his studies in 1947 at the College of Art (Kunsthochschule) in Hamburg, which he completed (after a break) in 1951 under the tutelage of Willem Grimm. Afterward, he worked there as a lecturer in lithography and etching. Early on in his career, an extensive collection of drawings and lithographic work was created. International museums such as the Museum of Modern Art in New York became aware of him. After a stay in Paris, he returned in 1963 as a professor of free graphics and painting at the College of Art in Hamburg. In 1968, he opted for a life as a freelance artist and stopped his teaching as a professor. Soon after, he created his first sculptural works. From then on, he worked as a draftsman, lithographer and sculptor. He enjoyed radiating success in all areas, far beyond the borders of Germany. As early as 1964, Wunderlich was represented at the documenta III, exhibitions in the USA Japan and in France soon followed.

As with his drawings, the subject of Eros plays a significant role in Wunderlich's sculptural work, where he often used mythological themes. His style is unmistakable and is often associated with the neo-surrealism and the fantastic realism. Appeals of 'Art déco' and 'Jugendstil' are not to be overlooked.