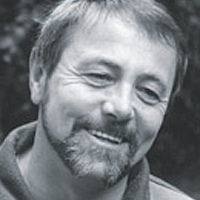 Pepi Pescollderungg was born in Stern/Abteital and attended the art school in Selva and the Art Institute in St. Ulrich. Since 1977 he has worked as a freelance sculptor.

Pescollderungg works primarily with wood. Among his numerous works, there are those of great abstraction, but at the same time there are delicate sculptures with traditional subjects such as the religious art. Such as the representations of the Holy Family and nativity scenes he skilfully carves from a single massive block of wood. Also abstract work has its place in his repertoire. His oak sculpture that marks the end of the sculpture trail in Reckental was designed to be both: a form study with possibilities to sit or lie, giving the viewer the opportunity to reflect in a peaceful environment on what they have seen.

Pepi Pascollderung is an ever learning artist. He attaches great importance to the confrontation with fellow artists and has participated in a variety of sculpture symposia over the years. He has also been involved as a lecturer for many years: as an art educator and teacher at the carving school in St. Jakob near Ahrntal.