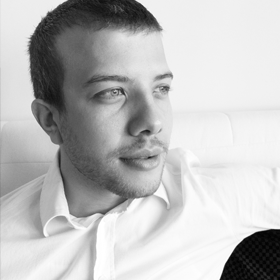 During 2004-07 the Artist studied at the professional school, "Johannes Steinhäuser" which resides in Lasa, South Tirol in Italy. He earned degrees for both Stonemason and Stonecarver for his practice in the well-respected material, lasa-marble.

Mühlhäußer is exhibiting in the show, "Personal Structures" at Palazzo Bembo as offical part of the 55th Biennale di Venezia 2013.