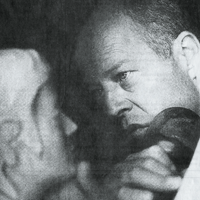 Robert Simon could have been a musician. Before he became a sculptor, he studied music, but decided to perfect his sculpting talents which were clearly visible in his youth. In Austria - at the sculpture school Geisler-Moroder, he has been sharing his knowledge and experience as a lecturer with the next generation. At the same time, he completed an apprenticeship as a wood and stone sculptor.

Since 1982, Simon has worked as a freelance sculptor. Since then he has extended his field considerably: not only with wood and stone, but also glass and metal take shape under his skilled hands. Simon's sculptures and objects have been exhibited at home and abroad. He has even designed bronze jewelry with the experience and expertise that only a sculptor would possess. His table sculpture "Reality" and "Pelikan" gave a great insight into Simon's large stylistic range.