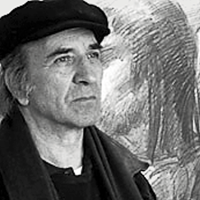 Romano Cosci studied in Pietrasanta, near the famous marble quarries of Carrara (from Ferruccio Vezzoni) and sculptures (from Leonidas Parma). As a painter and as a sculptor, he always remained committed to the old masters and found his life's theme in religious art. Many of his frescoes decorate churches throughout Italy. More impressive are still his sculptural works in marble and bronze. His statues are found in many Italian cities; recent works include a portrait of Blessed Bartolo Longo in Pompeii (2000) or a bronze door with the motif of the eight martyrs priests of Versilia (2001). His main work (a marble portrait of Josemaría Escrivá, the founder of Opus Dei), was founded in 2005 after two years of work placed in a niche of St. Peter's Basilica.

Cosci's realistic church art fits perfectly into the church atmosphere and its traditions. But even his sculptural works, that have no church related inspiration, are based on the great sculptural tradition of his native country.