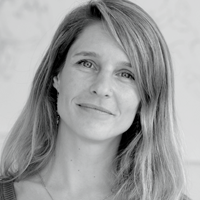 Sukhi Barber was born in Hertfordshire, England. From an early age she was drawn to the classical and ancient traditions of art and philosophy, which led her to undertake a traditional sculptural training at "The City and Guilds of London Art School". There she gained a firm grasp of figurative clay modeling and life drawing, graduating in 1995 with the prize for sculpture, and a scholarship from Madame Tussauds.

After graduation Sukhi traveled to India, captivated by the timeless quality of peace and balance that she found in the art of Asia. Settling in Kathmandu, Nepal, she spent the next twelve years studying Buddhist philosophy and producing sculptures based on the traditional techniques of stone carving and lost-wax bronze casting.
Sukhi's sculptures are intended to bridge the cultures of East and West. Embodying the peace and compositional balance of ancient devotional art, they represent complex philosophical ideas with a simplicity and clarity that renders them accessible to the Westernviewer. Exploring themes of hidden potentials, and the transcendence of our limiting view of a solid reality, her work often represents the negative space as being as important as the material itself, implying the dance of form and spirit, a constant state of transformation.

Sukhi is currently living and working in Tübingen, Germany.

2004-2007 Restoration and remodeling of the lifesize statue of the goddess Lakshmi, in situ at the World Heritage Site "Garden of Dreams", Kathmandu, Nepal. Commissioned by the Austrian NGO Eco Himal and funded by the British Government of Her Majesty