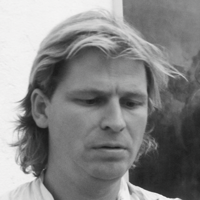 After a sculptor apprenticeship, Volker Scheurer visited the school for stone formation in Freiburg at Breisgau, he graduated with a masters title in sculptor. Since 1990, he works as a freelance sculptor.

At the same time, Scheurer worked as an instructor and lecturer. From 1994 to 2000, he passed his knowledge as the leader of the sculpture at the largest natural stone factory in the northwest of Switzerland on, after which he worked as a lecturer at the Waldorf School in Schopfheim from 1998-2000. In addition, Scheurer is active in various committees; as a member of the South German Working Group "figures in stone," the "Art and Space" initiative (Basel) and of the association Young Art, he is also dedicated to the promotion of young sculptors and sculptors in general.

Scheurer's extensive work has been recognized in numerous exhibitions at home and abroad. Large sculptures of his decorate countless public spaces. The characteristics of his sculptures are the reduced, slender shapes and a recurrent interaction with the human body, he likes to resort to basic geometric shapes. Scheurer works with stone (preferably basalt lava), wood, bronze and even ice. On several occasions he has participated in competitions, in Naroyo (Japan), where ice artists come from many different nations and compete against each other. Even there he made a name for himself through this unique art. So he was asked some time ago by the representatives from Naroyos, to participate in the design of a street in the park of the university of the Japanese town.

2006 Artists with Environment, British Columbia, CAN