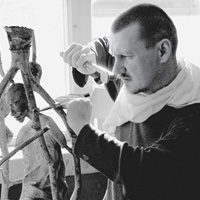 Since 1989 he has been working in his own workshop, favouring the materials of bronze, stone and steel