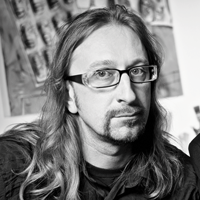 Guido Häfner is a sculptor and graphic artist who completed his studies in fine mechanics at the "Technical University" (TU) in Munich. He also completed a master's degree in this field of study. Since 1995, he has been working as a freelance artist. Together with his brother John (b. 1961), he has roughly had about 250 exhibitions in Germany, Taiwan, Switzerland, Austria, Poland and Dubai. Häfner's sculptures can be found in numerous public collections (including Foundation of Prussian cultural field seat, Berlin; Buddenbrooks House, Lübeck; numerous heads of state and university libraries and the Goethe Institute); as well as in public places in many cities (including Nuremberg, Mainz, Würzburg and Taipei).

Häfner's works are based upon scientific knowledge, were each discursive explanation of the world reaches its limit. His works start from scratch so to speak, and formulate new archetypes that are still referenced from prehistoric times, but at the same time - as an archetype, not as a stereotype - they act very modern.