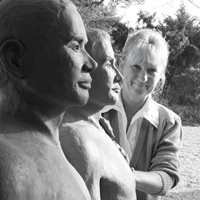 Following further studies in art at the St. Luc Institute of Arts, Brussels, training as a graphic artist and illustrator, Annie Jungers pursued her profession as a publicity designer at various major promotional agencies. She subsequently set up her own creative bureau and managed numerous publicity budgets in this capacity. Her independent status allowed her to take up sculpture. Self-taught, she cultivates the tradition of perfection by maintaining proportions, in sculpture and in drawing alike. Her “plus point” is creativity, the search for concepts. Boasting a formidable personality, she produces creations in clay and her works are cast in bronze according to the lost wax method. She works in partnership with a number of Art foundries in France, Belgium and Germany.

Her credits so far include the creation of several ranges of sculptures. The anneaux d’Étoiles – rings of stars – sculptures, with their subtle sensuality, invite caresses where exquisite sentiments gush forth from the clay medium.

There is also the “portraits” range, which features various personali- ties such as His Highness Prince Rainier of Monaco.

The “conceptual and monumental” range denotes a number of works which are already established classics.

Annie Jungers designs indoor and outdoor sculptures for public authorities, companies and private individuals. Her creativity means that she is able to submit a number of projects, thus accommodating a request or proposed theme. She also creates hyper-realistic portraits based on photos or life models. Numerous projects are currently being examined and pursued.