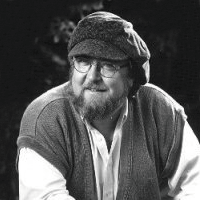 Theophil Steinbrenner studied sport and art education from 1965-1969, upon which he spent a few years as a teacher before he ventured into the fine arts in 1983. Since then, Steinbrenner has created an extensive range of graphic (drawings, etchings and water colours) and ceramic (free ceramic, as well as artistically designed stoves) works. In addition, in the last decades he created numerous bronze sculptures. The spectrum was vast, from small to large sculptures, Steinbrenner presents them in his self-designed sculpture garden in his home town of Schwarzach am Main. He is also one of the most sought-after designers of fountains, not only in his region; more than 300 fountains were created in his studio for communities and cities from Hamburg all the way to the Upper Austrian Perg.

The idea of Steinbrenner would, however, be incomplete, if no mention was made of his cultural and political significance which he had in his homeland: In 1987, he founded the Turm Museum Sommerach, which has since also served as a stage for various cultural events.

2004 Ratschbuben-Brunnen in Schwarzach am Main