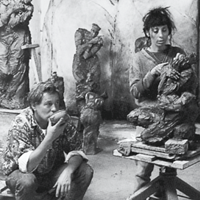 A woman, a man, spouses, sculptors, pioneering partners, atypical and low-key iconoclasts from the forests beyond Alsace, attending to elves, wild boar and a mule while working resolutely for major cities and urban architectural spaces.

France and Hugues Siptrott attempt, often off the beaten tracks, to reconcile extremes within a new dynamic.They speak out for the alliance of humanity and modernity, not a sectorised cleft; the complementarity of nature/culture, not their annihilating opposition and subjection.

In the course of their joint career, they have realised major installations for a highway layby in Nemours: “Mignonne allons voir,” the “fontaine de ScyIla” at the Palace of Congress in Strasbourg, the square of the French embassy in Conakry, a Paris Metro station, “Les hommes de la cite” or “AIors, pense à un oiseau très blanc” on the esplanade of la Défense in Paris.

They have likewise realised the protecting saint of the cathedral of Evry, the large memorial dedicated to the warriors of North Africa and overseas in Strasbourg as well as numerous public commissions.

In parallel they have taken part in major art shows : Art BaseI, fiac Paris, and in gatherings in northern Europe.

Wandering from Soultz-sous-forêt to New-York and from Windstein to Knokke le Zoute, they willingly admit they are an odd duo, north/south Sicilian-Norwegian, via Alsace and Lorraine.With their shoes.

In recent years, concerned by the widening clefts between people’s ordinary life and the clichéd “musts” projected by the media, convinced of the necessity to re-harmonise the life experience man/nature/culture, they work to generate a new look at man in his environment and in particular in “the Vallée de la Faveur, workspace, living space, and evolving oeuvre on the ground,” right in the middle of the forested massif they have renamed the “Vosges du grand nord.”