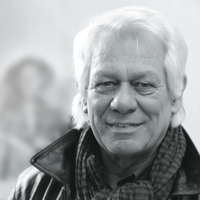 In his professional life, Heinz Rupp was one thing above all: a master of the small form. After completing his training as a steel engraver, goldsmith and studying at the ‘Art and Craft School’ in Pforzheim, Rupp worked as a jewelery designer for over three decades.

In 1997, Rupp set himself even “bigger“ challenges by becoming active as a sculptor and painter. It soon showed that Rupp could also achieve great things in this segment of work.

The first exhibitions followed, and with the expansion of his processed materials (from wood to metal, in particular bronze) and topics (animal figures, female figures, a series of miniature towers) his artistic reputation grew.

In 2002, Rupp was awarded the Euro Gold Medal by the European Art and Culture group in Baden-Baden. Today, more than a decade later, his work is displayed in many public and private collections and his exhibition chronicle at home and abroad is rather impressive.