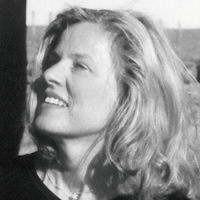 Before Gudrun Cornford came to the sculpture forming world, she worked as a graphic designer for many years. As a student of Armin Hofmann and Donald Brun, she studied graphic in Basel, majoring in free drawing. Shortly after that she found herself at an advertising agency in London as a freelance artist and illustrator. In 1987 her first sculptures were created. Her autodidactic efforts and regular attendance at seminars for "Sculptural Design" at the "TU Darmstadt" allowed her to gain a very solid base in her profession.

Soon after, teaching activities followed. In 1996 she received a teaching assignment for life drawing at the "FH Darmstadt" in the area of design/architecture. In 1998 she taught sculptural design at the same place and from 2000 to 2004 she taught exchange basic drawing and experimental drawing.

Cornford's works have been exhibited in numerous group and solo exhibitions. Since the early nineties, she has increasingly presented her sculptural work to the public. Now she has the ability to look back on a variety of work in alabaster, marble and bronze. Cornford also works for public projects and made ​​sacred sculptures; in 2003 a large-sized figure of Christ was created by her for the Protestant church in Georgenhausen.