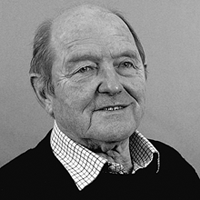 Ernst Günzkofer is a well-educated stonemason, and as such has successfully completed his "masters of crafts" (Meisterprüfung). To this profession also came the arts, which proved to be a very successful endeavour: Still in his late twenties, Günzkofer claimed a gold and bronze medal for his sculptural works at the Federal Garden Show in Kalsruhe in 1967. From that point on more prices followed, as he was awarded the Bavarian State prize at the Munich craft fair in 1988.

Characteristic of Günzkofer's work is the sculptural modelling of movement in the sense of a figurative-realistic representation of "frozen moments". Many of his small sculptures, regardless if they were human or animal, impressed by the inherent tension that gives solid bronze obvious dynamics.

In addition to Günzkofer's numerous small sculptures, he also created a number of large fountains. In his home town of Prien the fountain "Lesende" can be found at the local high school as well as the "Rübezahl" which is in the area of the Sparkasse in Prien.